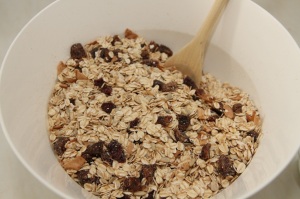 I have been inspired to do this many times but have not gotten around to it until last week when I was inspired by River Cottage and Hugh making his own untoasted nut-free muesli. So I decided to get my act together and give it a go. And thankfully I succeeded in making something quite enjoyable and Cohen and I have been enjoying it all week. Jemima wasn’t a big fan so we didn’t waste it on her 😉

My aim was to make a nut and sulfite free muesli. Sulfites are present in a lot of dried fruit. Cohen’s asthma seems to react to sulfites and I don’t see the need to be consuming them anyway. I used traditional rolled oats, sunflower seeds toasted, dates chopped in quarters, dried cranberries and dehydrated apple which I did myself in the oven. Quantities are a bit iffy as I didn’t measure the oats but the photos should give you a good idea. Basically I 3/4-filled the container (holds a total of 2.3L) I keep my muesli in with oats and then put them back in a bowl. Then I added about a cup of the dried fruit, the dehydrated apple (which was almost a whole apple worth) and about 1/2 a cup of the seeds. 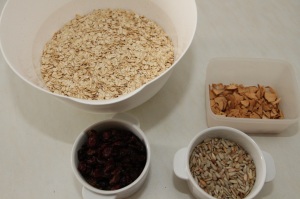 Dehydrating the apple was pretty easy. I set up a tray with baking paper on it, thinly sliced the apple and placed it on the tray in one layer. I put it in a preheated oven at 100C and then left it there for a few hours until it was done. At one point I did turn it up but I think my oven runs at a lower temp than the dial actually says. Just keep checking and turn it up if needs be (ie if it’s going really slowly). I love that I can have apple bits without the sulfites which are usually used in dried apple. I did the apple the night before – make sure you keep it in an airtight container once it has cooled so it stays crunchy (mind you it got softer again over the week because it absorbed some moisture from the other fruit I think)

I toasted the sunflower kernels myself in a pan over a low heat. Keep an eye on them and keep them moving so they don’t burn. They will brown a little and smell great when they are ready. They give a nutty flavour without the nuts and a great crunch.

Favourites in the Kitchen

Find it in the itchin’ kitchen

Keep up with us

I am a qualified Nutritionist, but I’m also a Mama in the Kitchen

This blog is intended to give you ideas for meals and other useful information. Please speak with your allergy specialist, GP and/or a dietician for advice about personal diagnosis, diet and nutrition.

Who's been in the kitchen?